The store will not work correctly in the case when cookies are disabled.

Promote healthy nerve function with Dr. Berg Nerve Support. This unique formula is packed with eight incredible nutrients that promote a healthy nervous system, including benfotiamine. If you want a formula that offers full nervous system support, this supplement is perfect for you. Each bottle contains 90 potent capsules.

Product was added to your favorites

Skip to the end of the images gallery
Images 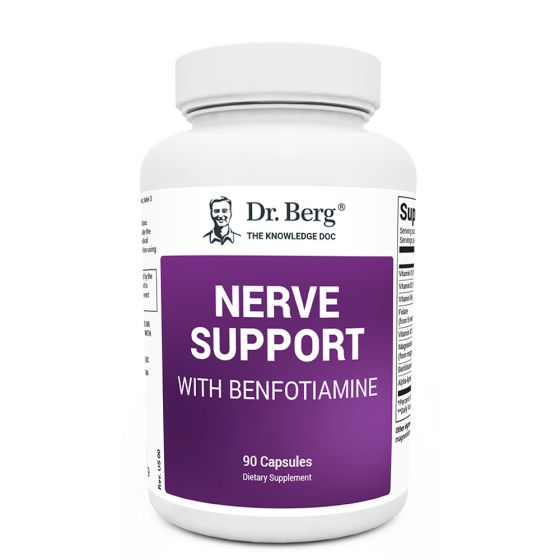 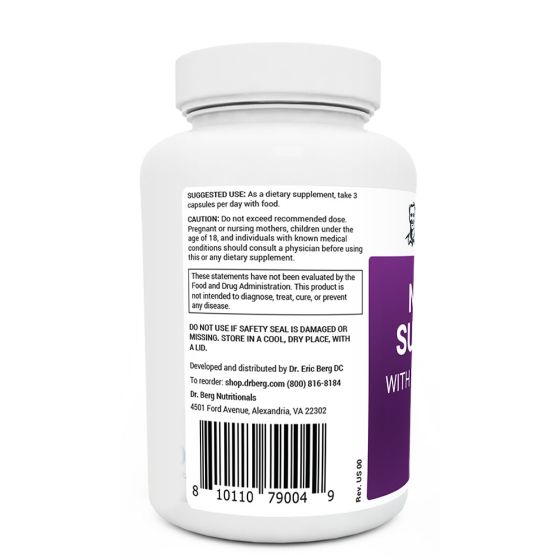 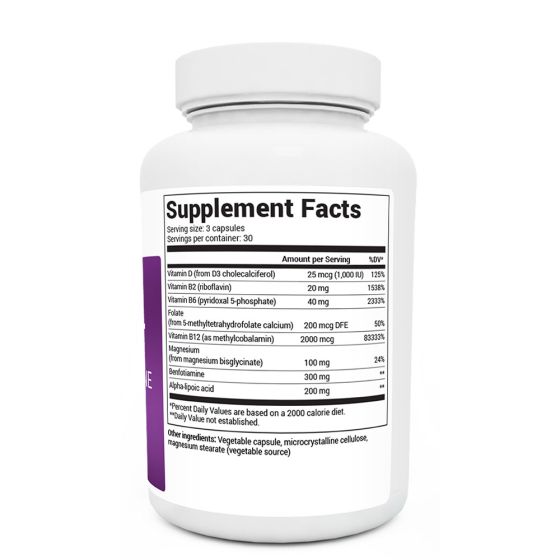 Dr. Berg Nerve Support is designed to promote the health of your entire nervous system using eight powerful ingredients, including benfotiamine, folate, magnesium, alpha-lipoic acid, and vitamins D3, B2, B6, and B12. These ingredients are excellent for reducing oxidative stress, lowering inflammation, and supporting normal nerve function.

Benfotiamine is a fat-soluble form of vitamin B1 (thiamine) that is 3.6 times more bioavailable than water-soluble thiamine. This unique nutrient is one of the best defenses against nerve cell damage. It helps provide nerves with fuel, relieve nerve pain, transmit nerve impulses, support muscle contractions, and reduce oxidative stress. Benfotiamine is one of the only synthetic nutrients we recommend at Dr. Berg Nutritionals because of its safety, effectiveness, and unmatched benefits for the nervous system

Suggested use: As a dietary supplement, take 3 capsules per day with food.

Caution: Do not exceed recommended dose. Pregnant or nursing mothers, children under the age of 18, and individuals with known medical conditions should consult a physician before using this or any dietary supplement.

*Percent Daily Values are based on a 2000 calorie diet.
**Daily Value not established.

Vitamin D is one of the most vital nutrients for nervous system health. It has potent neuroprotective effects and reduces oxidative damage to nervous tissue. Vitamin D is also involved in the activation of essential neurotransmitters that regulate the nervous system.

Vitamin B2 is a powerful antioxidant that helps keep free-radical damage under control in your nervous system, and it's also a vital nutrient for maintaining low neuroinflammation.

Your nervous system requires vitamin B6 to produce neurotransmitters, including dopamine and serotonin. Without normal neurotransmitter levels, nerves fail to communicate with each other, causing abnormal breathing, irritability, anxiety, a lack of energy, and many other adverse effects.

Folate is essential for the formation of the nervous system and the production of neurotransmitters. Folate deficiency is commonly associated with mental fatigue and depression symptoms.

Vitamin B12 maintains myelin sheaths, which are sleeve-like protectors that shield your nerve cells from damage. It's also essential in the production of "feel-good" hormones that help stabilize your mood and energy levels.

Magnesium is a crucial mineral for the transmission of signals between your neurons. It also plays a role in neuromuscular conduction, which is the process that allows your central nervous system to control muscle movement. Additionally, magnesium helps protect against brain atrophy caused by neuronal loss.

ALA is a highly potent antioxidant that has the power to neutralize free radicals known to cause nerve pain. This unique compound can also stimulate nerves and regenerate damaged nerve fibers.

Benfotiamine is a synthetic form of vitamin B1 (thiamine) that is far more bioavailable than other natural forms. It has some incredible benefits for your nervous system—it helps protect against nerve damage, supports muscle contractions, and promotes normal nerve signals.

This carefully-designed formula supplies eight high-quality ingredients, giving you comprehensive nervous system support in every capsule. We take product quality and customer satisfaction seriously, and we know you'll love Nerve Support. If you're not happy with the results, you can take advantage of our 30-day money-back guarantee.

Nerve Support is right for you if…

How to use Nerve Support

Who shouldn't use Nerve Support

While these ingredients are safe for most people, pregnant or nursing mothers, children under the age of 18, and individuals with known medical conditions should consult a physician before using this or any dietary supplement. Always stay within the recommended dose.

RISK FREE! Contact us within 30 days and we will refund you, no questions asked!